In the course of a long and successful career as a journalist and author, Paul Johnson has known popes, presidents, prime ministers, painters, poets, playwrights, even the foul-mouthed publican Muriel Belcher, who ran the legendary Colony Club. Harking back to the scandalously anecdotal 17th century book by John Aubrey on the celebrities of his times,Brief Lives is the distilled essence of Johnson’s experience of a complex variety of people who have contributed to our political, spiritual and cultural life. 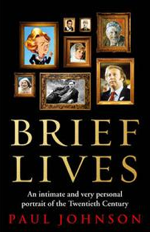 He advised Margaret Thatcher, counselled Princess Diana, had a drawing of him done by Ernest Hemingway and enjoyed the company of John Osborne, Arnold Wesker and Harold Pinter at Buckingham Palace. He has been an insider, outside observer and universal commentator on the individuals who have changed history, formed public taste or simply lightened our lives by their presence.

Any historian of the last half of the 20th century – especially if he has a taste for the comedie humaine – should read this book, if only to learn more about its author, the Thomas Carlyle of our age, who has also played a life-enhancing part in that history.
–New Statesman
Anybody who relishes a good gossip – and this is high class and occasionally salacious – will throughly enjoy Paul Johnson’s 250 brief lives . . . Johnson has splended anecdotes about the men and women he has met – prime ministers and presidents, royals, archbishops and popes – and about the bitchiness of Oxford dons and the raffish hacks of Fleet Street before the dispersal to Wapping.
–Telegraph
Candid, insightful and witty pen-portraits of an extraordinary, starry cast.
–Daily Mail