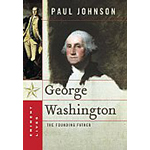 George Washington is by far the most important figure in the history of the United States. Against all military odds, he liberated the thirteen colonies from the superior forces of the British Empire and presided over the process to produce and ratify a Constitution that (suitably amended) has lasted for more than two hundred years.

In two terms as president, he set that Constitution to work with such success that, by the time he finally retired, America was well on its way to becoming the richest and most powerful nation on earth.

Despite his importance, Washington remains today a distant figure to many Americans. Previous books about him are immensely long, multivolume, and complicated. Paul Johnson has now produced a brief life that presents a vivid portrait of the great man as young warrior, masterly commander-in-chief, patient Constitution maker, and exceptionally wise president. He also shows Washington as a farmer of unusual skill and an entrepreneur of foresight, patriarch of an extended family, and proprietor of one of the most beautiful homes in America, which he largely built and adorned.

Trenchant and original as ever, Johnson has given us a brilliant, sharply etched portrait of this iconic figure—both as a hero and as a man.