The Vanished Landscape: A 1930s Childhood in the Potteries

Paul Johnson grew up in Tunstall, one of the six towns around Stoke-on-Trent that made up the Potteries’. 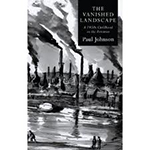 From an early age he was fascinated by the strange beauty of its volcanic landscape of fiery furnaces belching out heat and smoke. As a child he often accompanied his father – headmaster of the local art school and desperate to find jobs for his students, for this was the Hungry Thirties – to the individual pottery firms and their coal-fired ovens. His adored mother and father are at the heart of this story and his older sisters who, as much as his parents, brought him up. Children made their own amusements to an extent unimaginable today, and his life was extraordinarily free and unsupervised. No door was locked – Poverty was everywhere but so were the Ten Commandments.’ These pages recall the joys of going to school on a minor branch-line – the 1930s were the tail-end of the great age of rail in England – and the eccentricities and ferocity of grown-ups in an age before political correctness.

The book ends in 1938 as the 11-year-old author queues at the town-hall for a gas mask.

“This neat, well turned narrative is thrown together with dexterity and assurance” (SPECTATOR )

“The sketches are charmingly done and give us an idea of what the Potteries must have looked like.” (SUNDAY TELEGRAPH )

“His evocation – and deptiction… will move anyone who, like the author, has spent a past happy time in the area of the Potteries.” (ANTONIA FRASER EVENING STANDARD )

“… nothing he has done, not even his recent much gentler essays in The Spectator, has prepared one for the charm of of this enchanting memoir of his childhood in the potteries… Every page of this book gives pleasure…” (ALLAN MASSIE DAILY TELEGRAPH )

“a vivid portrait of Thirties life, especially of his adoring mother… His book is a paen to maternal eloquence and domesticity. Lucky him. And lucky her.” (VALERIE GROVE THE TIMES )

“This attractive book escapes the dangers of whimsy or sentimentality… Johnson has written a descriptive rather than an introspective memoir… It is to be hoped that he will give an equally beguiling account, even if it cannot be as serene, of his adolesence and later years.” (TIMES LITERARY SUPPLEMENT )

“with a series of delightful drawings… a charming memoir, highly recommended.” (CATHOLIC HERALD )