The Renaissance holds an undying place in the human imagination, and its great heroes remain our own, from Michelangelo and Leonardo to Dante and Montaigne.This period of profound evolution in European thought is credited with transforming the West from medieval to modern; reviving the city as the center of human activity and the acme of civilization; and, of course, producing the most astonishing outpouring of artistic creation the world has ever known. Perhaps no era in history was more revolutionary, and none has been more romanticized. What was it? In The Renaissance, the great historian Paul Johnson tackles that question with the towering erudition and imaginative fire that are his trademarks. 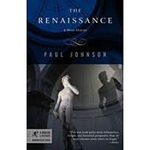 Johnson begins by painting the economic, technological, and social developments that give the period its background. But, as Johnson explains, “The Renaissance was primarily a human event, propelled forward by a number of individuals of outstanding talent, in some cases amounting to genius.” It is the human foreground that absorbs most of the book’s attention. “We can give all kinds of satisfying explanations of why and when the Renaissance occurred and how it transmitted itself,” Johnson writes. “But there is no explaining Dante, no explaining Chaucer. Genius suddenly comes to life, and speaks out of a vacuum. Then it is silent, equally mysteriously. The trends continue and intensify, but genius is lacking.” In the four parts that make up the heart of the book–“The Renaissance in Literature and Scholarship,” “The Anatomy of Renaissance Sculpture,” “The Buildings of the Renaissance,” and “The Apostolic Successions of Renaissance Painting”–Johnson chronicles the lives and works of the age’s animating spirits. Finally, he examines the spread and decline of the Renaissance, and its abiding legacy. A book of dazzling riches, The Renaissance is a compact masterpiece of the historian’s art.