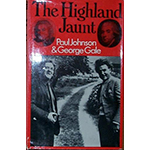 In 1773 Johnson and Boswell conducted their celebrated tour of the Highlands and Islands of Western Scotland. Two centuries later Paul Johnson, former editor of the New Statesman, and George Gale, present editor of the Spectator, decided to follow in their steps. Opinionated, assertive and contumacious, united only in their obstinate illusion that they were men of the most dulcet moderation, it was clear that neither could be cast convincingly in the role of Boswell. Both therefore wrote – and illustrated – their own commentaries on their travels and on each other; the two accounts, sometimes similar, more often strikingly divergent, providing a vividly three-dimensional picture of the land through which they passed. By Loch Lomond and Inveraray they came to Mull and Iona, then, by Glen Shiel and the fearful Pass of the Cattle to Applecross. From there they continued up the West Coast by Ullapool to Cape Wrath, east as far as Strath Naver, then south to Dornoch and Dunrobin and so to Perth. A Tour, con­cluded Boswell, on which ‘I shall ever reflect with great pleasure’. The authors echo Boswell’s words. To write a successful travel-journal calls for a lively pen and mind, a strong sense of history and of humour, imagination, insatiable curiosity and a capacity to enjoy oneself and to communicate that enjoyment to the reader. All these the authors have, as well as a tempestuous radicalism which leads them to challenge every shibboleth and question the validity of every principle. The result is an enormously entertaining book which will de­light and infuriate everyone with even a marginal interest in the Highlands.